Exploring the Future of Cancer Research at MIT’s Koch Institute 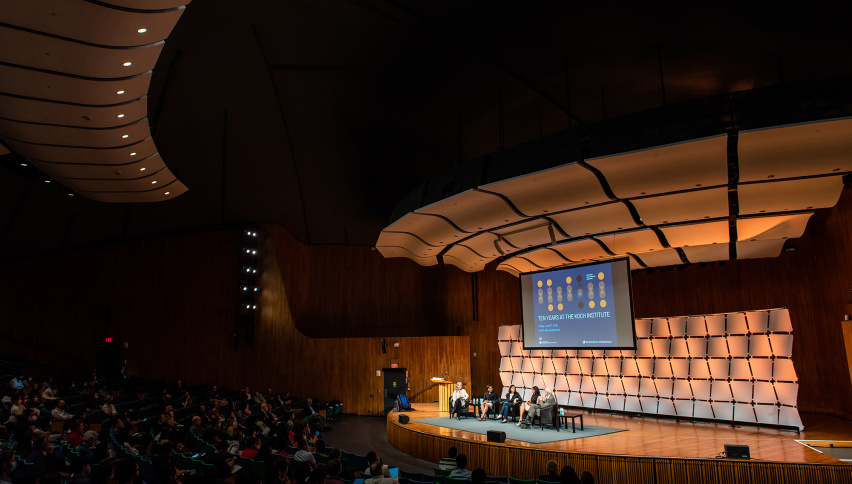 On June 17, the cancer research community from MIT and beyond gathered in Kresge Hall for the 20th Annual Cancer Research Symposium, “Ten Years at the Koch Institute.”

When it opened its doors about ten years ago, the Koch Institute ventured into new territory in cancer research, bringing biologists together with engineers, computer scientists, and clinicians to work collaboratively on some of the hardest problems in cancer. The symposium program reflected on the progress made in the past decade through this convergence of life sciences and engineering, as well as on future challenges and opportunities for cancer research at MIT and beyond. 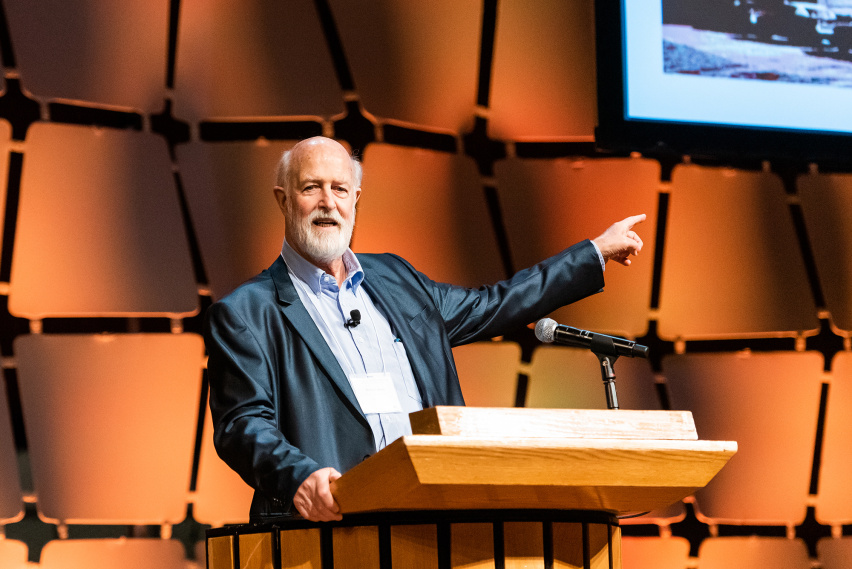 Richard Hynes kicked off the day’s agenda with a short tour of the long history of cancer research at MIT. In 1974, a candy factory on Main Street was transformed into the Koch Institute’s predecessor, the MIT Center for Cancer Research, where Hynes would become one of its directors. Rather than making chocolate, the building would become MIT’s home for groundbreaking research into the biological underpinnings of cancer. Watch the video. 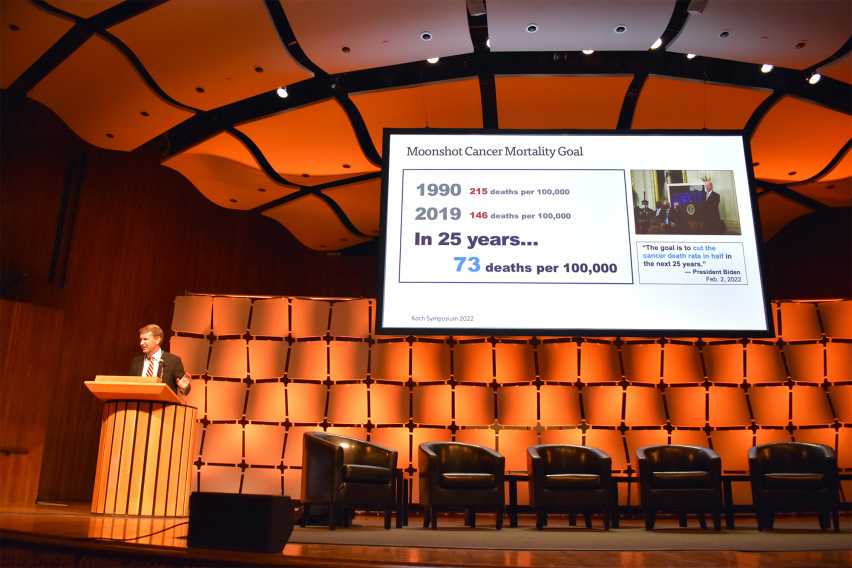 One of the primary goals of the Cancer Moonshot is to cut mortality in half over the next 25 years—ambitious and challenging, but achievable, as Ned Sharpless explains. Credit: Sarah Bastille

Ned Sharpless, the former director of the NCI, began the first session of keynote speakers by laying out the goals of the Cancer Moonshot, a program reignited by President Biden to “end cancer as we know it.”  Watch the video. 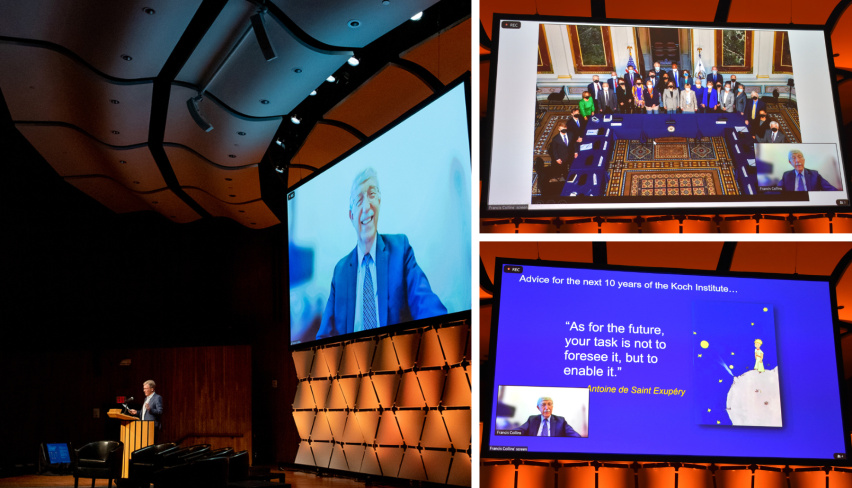 Francis Collins presented an overview of national scientific priorities in his role as Science Advisor to the President and Co-Chair of PCAST, including assisting with the reinvigoration of the Cancer Moonshot and the launch of ARPA-H, a new governmental body built to move quickly and boldly on translational opportunities, such as cancer vaccines. Watch the video. 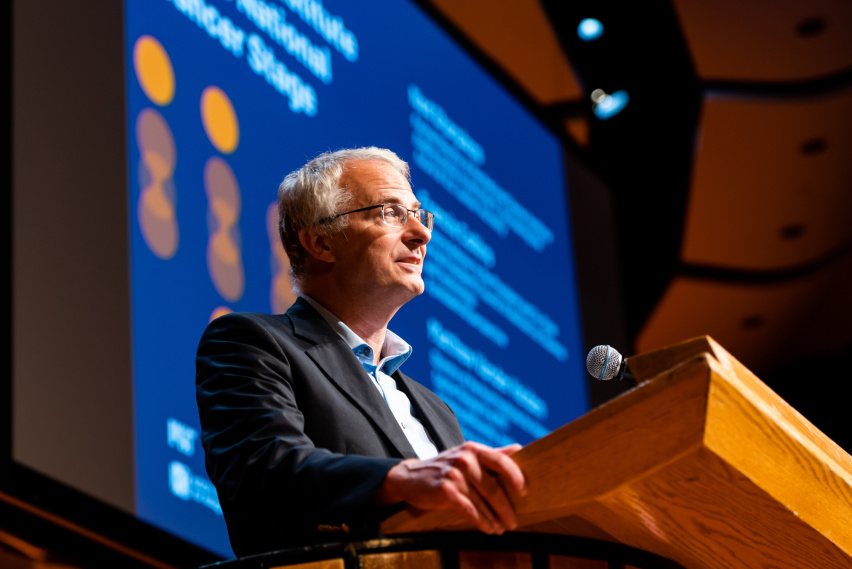 In the next decade at the Koch Institute, Director Matthew Vander Heiden said “our mission is the same: spare more suffering and save more lives.” But to do that, he argued that we need to approach that mission differently—to better apply computational biology and machine learning to solve the biggest problems in cancer, develop new funding models to increase the pace of research, and increase diversity in who does cancer research and who it serves. Ultimately, “we need to discover more, course correct, and speed the process by failing fast and falling forward.” Watch the video. 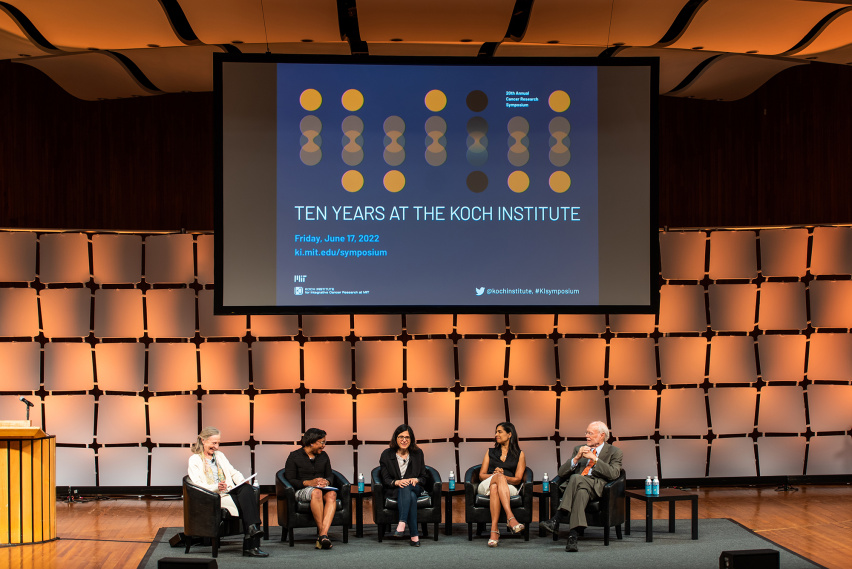 Aviv Regev, head of Genentech Research and Early Development at Roche, pointed to machine learning as a pivotal area in the future of convergent research. By helping researchers look at problems with different eyes and address them in radically new ways, Regev explains that machine learning can result “in this beautiful biology that expands in front of our eyes” in ways most people would not expect.  Credit: Sarah Bastille.

The Convergent Science panel, featuring Sangeeta Bhatia, Paula Hammond, Susan Hockfield, Aviv Regev, and Phillip Sharp, explored how we can transcend disciplinary divides and lay the groundwork for the future of cross-disciplinary, collaborative research and education. Watch the video. 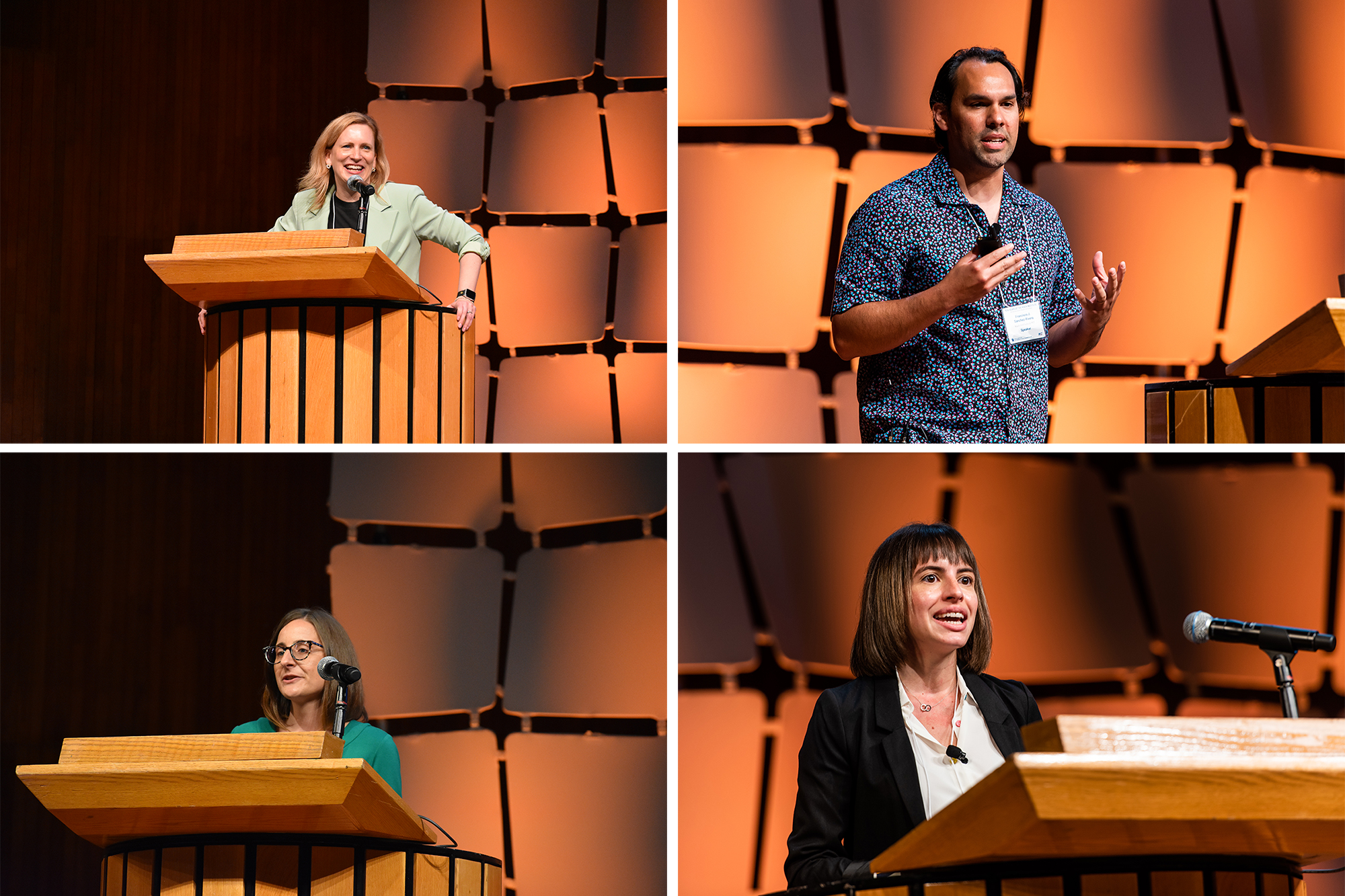 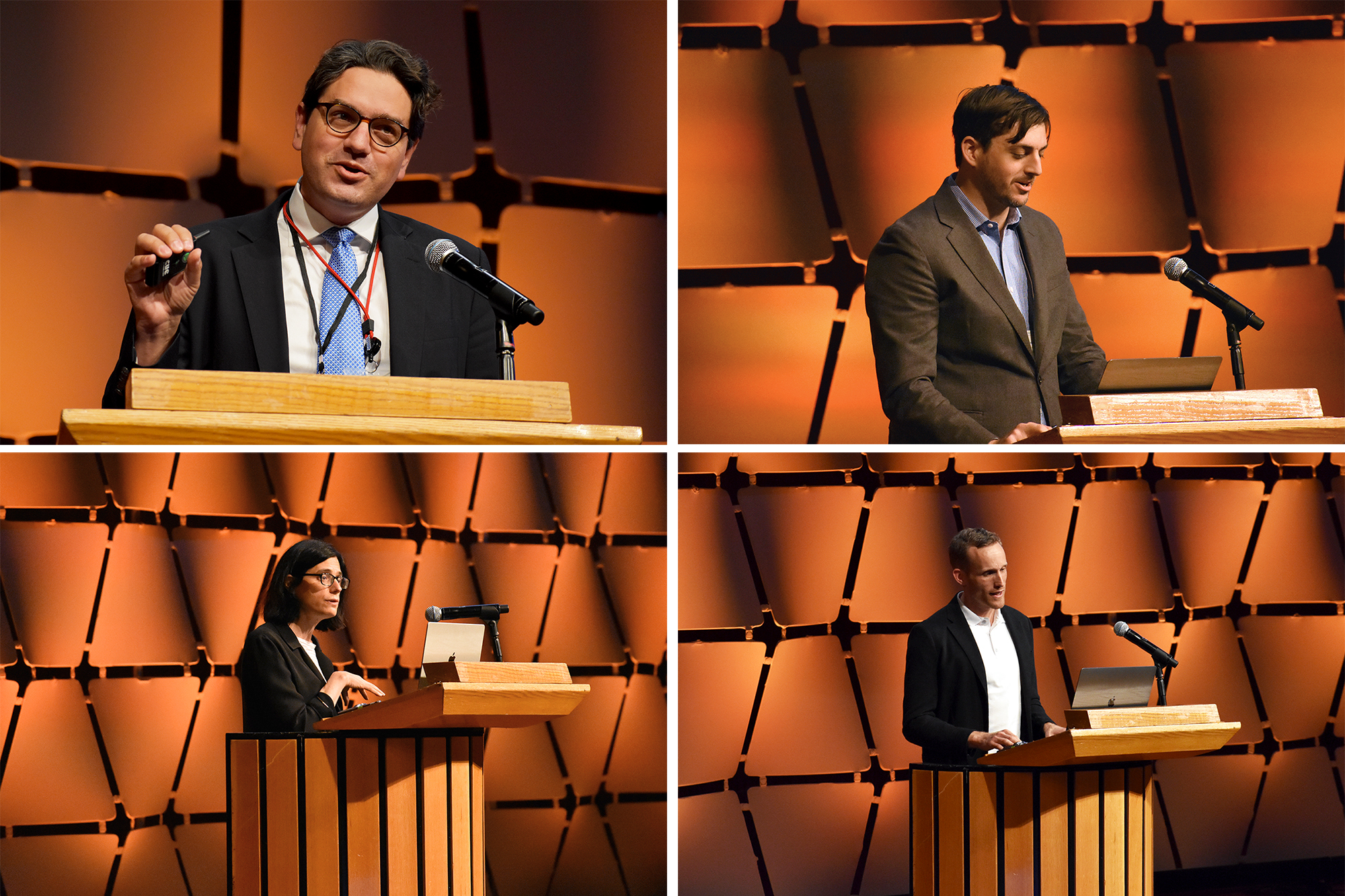 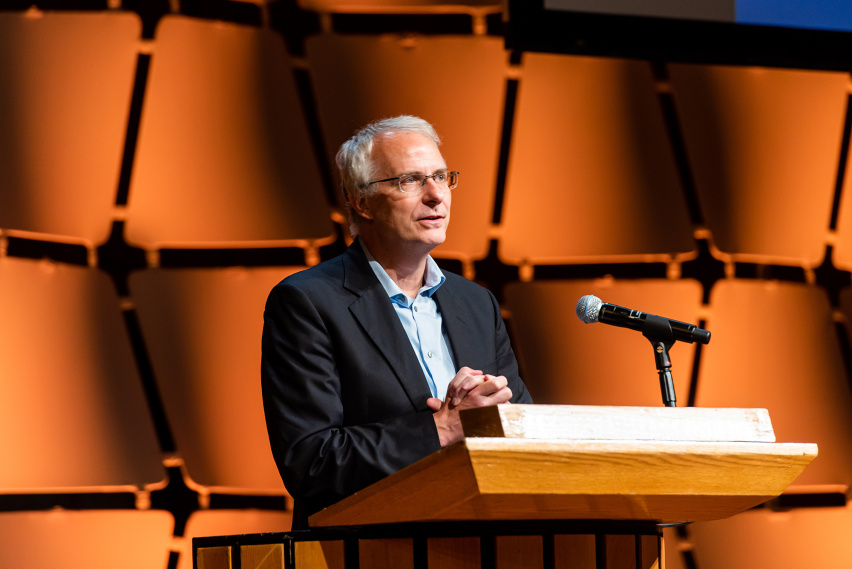 In his closing comments, Director Matthew Vander Heiden reflected on the past 10 years at the Koch Institute. Looking back, what we've accomplished over those years has been truly remarkable,” he said. “I think it really points out what can be accomplished if we work together, and I really look forward to what we all can do together in the next 10 years.” Watch the video.

Save the date for next year’s symposium on cancer vaccines, which will be held on June 23, 2023 at MIT’s Kresge Auditorium.